My baby boy turned one this week and — wow –so many emotions! A year ago I was waiting and wishing and dreaming about the little person inside me. And now here we are, 12 months later, and he’s no longer an infant who needs me for everything. He’s figuring out the world around him and he’s loving every moment of it. He’s crawling and cruising his way toward toddlerhood and I’m relishing every bit of it.

Before Nicholas was born, I thought I was ready for a second baby. And I was. And I also wasn’t. Because how can you really prepare to meet the new love of your life? The one who has spent 9 whole months as a part of your body but is about to become a real live human being. The one who kept you awake, kicking and rolling around in your belly, but who is, really, still a stranger.

So in honor of Nicholas’s FIRST BIRTHDAY, here are a few things I wish I knew a year ago.

When baby number two comes along you’ll simultaneously feel like an old pro at motherhood and a complete newbie. All newborns require the same thing: food, clean diapers, a safe place sleep and love. And since you have one already, you’ll be good at learning what this second one needs a little more quickly. You’ll probably be more relaxed about things too. But, then there’s the problem that this baby is not the same as the other baby. So if your first was a great sleeper, the second may or may not be. If the first cried a lot, the second might be more willing to go with the flow (which is usually the case with the second baby because they have no choice. They’re often at the mercy of their older sibling’s schedule). I was–and continue to be–so surprised to see where my two are alike and where they are vastly different. It’s like watching my own little science experiments 🙂 At 4 years old and one year old, I can already see the huge differences in their personalities and I can’t wait to watch Nicholas and Gia grow and see how this manifests itself in the future.

Your older child will adjust. Sure there will be hard times, but you will all be fine. Better than fine. You’ll all be happier and there will be more love. I remember a year ago I was so scared that the arrival of a sibling was going to ruin Gia’s happy little life. And then I’d feel guilty for thinking of the new baby as anything but a major blessing for all of us. It turns out that Gia loves her brother more than we could have ever imagined. She is sweet to him in ways I never expected and he just adores her. In fact, that’s one of the things that has surprised me most about having two children. The love these two have for each other is just beautiful to watch.

Another thing that surprised me? My day to day life is quite different now than it used to be. You can’t really know what it’s like to have two little people depending on you until it happens. You thought you were busy with just one child, but #2 brings it to a whole other level. For a long time I kept thinking “Wow that was a busy week. Next week will be less crazy.” And then the following week would come and it wouldn’t be any less busy. It took me a while to realize that no.time.for.anything was the new normal. By the time both kids were in bed at night — which used to be my time to do a quick tidy up around then house and then spend time writing or blogging– I’d be too tired to do more than stare at the TV. I quickly learned to just go with it. Do what you can and don’t beat yourself up about what doesn’t get done. Messy playroom? Dishes perpetually in the sink? Laundry piled everywhere? Not a big deal. If everyone is fed and generally happy, you’ve done your job and you’ve done it well.

And, really, that’s been the name of the game around here since our little Nicholas arrived on the scene. Go with the flow. And be happy. We laugh a lot and have fun doing the most mundane things.  Sure we do dishes and laundry and carpool to gymnastics and figure out which kid needs to be where at what time. But we also hug and snuggle and spend time together whenever we can. Because the number one thing I’ve learned this year is that these moments with my kids — just as they are now — are fleeting. Forget “time flies”…time positively disappears when you have a second child. Before I know it this stage of will be over. And I want to make sure I’ve stored up as many memories of these precious days as I can. 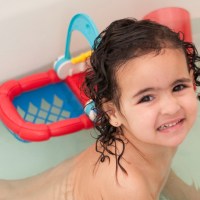