Posted in Uncategorized by
Krista
With the holidays just passed, I’ve been thinking (and talking–hi mom!) about the word spoiled. I’ve seen many pictures on Facebook of Christmas trees with so many presents around them there’s no room for anything else in the room. In fact, for a split second it made me feel bad about the presents we got Gia. Did we get her enough? In comparison to many people we know, we barely got her anything.  But, I’m not in the habit of keeping up with the Jones, so I quickly dismissed that worry.

So when a friend asked me how badly we spoiled Gia this Christmas, I had to take a breath before I answered her.

See, the thing is, I hate the word spoiled. I’m an only child and I’ve been hearing it my whole life. People often assume that because I have no siblings, I must have been spoiled. Not the case. It’s true that I didn’t want for much as kid, but my parents absolutely taught me that I had to work to get what I wanted. They also taught me to respect others and to respect my belongings. If I trashed a toy or a pair of jeans, there wasn’t a brand new one waiting for me.

So, when someone calls my kid spoiled, I bristle a little. Spoiled means ruined. It means “to diminish or destroy the value or quality of”.  Surely a few toys are not going to ruin my child. Especially if I’m teaching her to value the things she has and to realize that there’s much much more to life than the stuff we have.

But, there’s also something else going on here and took me a little while to figure it out–to figure out exactly why the word spoiled gets me so riled up. It’s because the word reeks of judgment. And no one likes to feel judged.

So then I wondered if maybe there’s another word that we could use that wouldn’t feel so judgey. The best I could come up with? Overindulged. Which is only marginally better. It stillsmacks of judgment. It’s not up to me to decide if someone else’s kid is overindulged. Because what looks like overindulgence to the outside may not be. We aren’t a part of that family. We don’t truly know. And so we shouldn’t judge.

Easier said than done. I’ll be the first to admit that I struggle with judgement. I try not to judge others, but it’s not easy. I think it’s human nature. First we compare ourselves to others and then, when we’re different or our choices are different, we judge to make ourselves feel better.  It’s not fair or right, but it happens.

So, back to the friend who basically called Gia spoiled. I wish I could say I had some really enlightened response for her. But honestly, it took me two days of good thinking time (I think best when I’m blow drying my hair) to figure out why all this irked me so much. So my response was something along the lines of “Actually we didn’t spoil her. She got a few new toys and some clothes, but that was it.”

Not a day goes by that I’m not thankful for all that we can give Gia. But that goes way beyond the stuff we can provide. It’s about the love and the happy home and the time and attention. Maybe next time that will be my response.

For now I’ll leave you with a few awesome pictures of my daughter in pigtails for the first time. When did she get old enough for pigtails? 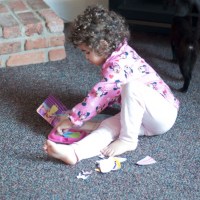